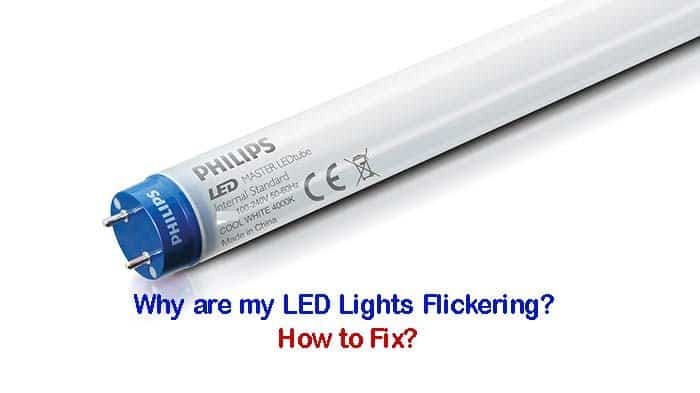 With the era of fluorescent fading off and the new era of LED light setting in, one would think that would be the end of flickering lights. However, this flickering light problem seems to have transitioned alongside the LED lights. Flickering lights are basically unappealing and quite unhealthy for the eyes. In case you have always asked the question, ‘why are my LED lights flickering?’ then we have an answer for you.

Quick Contents
Basic Information about Flickering of LED lights
Types of Flickering
Other Issues that May Result into a Flickering LED Light
How to Fix It?
Conclusion

You don’t want to stare at the light so much when it is flickering as it leaves your eyes slightly irritated. Why you might have wondered what the reason behind this fluctuating light is, you need to understand that this flickering is caused by fluctuating output. The LED light is designed in such a way that the dimmable diodes are programmed to come and off at a very high speed. Hence, the fluctuating output may interfere with this high speed on and off of the dimmable diodes.

Firstly, you need to understand that the electricity supply doesn't have much to do with why your LED is flickering. This is essentially so because all lights flicker regardless of the electricity supply. In the incandescent light, you may not notice this flickering issue essentially because the residual heat within the bulb often keeps the filament glowing while the flickering happens.

For instance, at an AC frequency of 50 hertz, the current that powers your light switches on and off fifty times in a second. Hence, an older generation LED light may experience flickering because it is connected directly to an AC and may visibly experience that fluctuating light alongside with the flickering current, but not anymore. This is, however, no longer the case as modern        LED light connects directly with the DC to ensure minimal flickering happens.

Invisible flickering occurs but is not entirely visible to the eyes, but they could create some unhealthy effects such as dizziness, eyestrain, headache, migraines, and other related symptoms. Since this type of flickering isn't entirely visible the question then remains how to know your LED light is flickering?

The best way to do this is to use your phone's camera. Just flip the torch camera on, and point towards the direction of the flickering light. Once you notice a dark band flipping through the reflection on your phone’s camera, then your light is invisibly flickering.

Other Issues that May Result into a Flickering LED Light

Aside from dimming systems and the voltage issues that may be caused as a result of current types, other things may lead to a flickering LED light. The most common of these other causes is a loose wire. Loose wires cause a lot of mishaps that may range from fire accidents and electrocution. Loose wires may also cause flickering light.

With a wire that isn't tightly secured in its place, it might trigger currents to fluctuate because of a lack of permanent contact. Hence, the light of your LED bulb may start flickering. If care is not taken, this could also damage your LED bulb. Aside from this, a blown fuse may lead to a flickering light in your LED bulb.  Tripped circuit breaker and overload may also result in a trigger that may lead to your LED light flickering.

At other times, flickering light may be as a result of a damaged capacitor. This usually happens because the internet component of your LED bulb couldn't withstand the heat that is generated internally. If you experience any of these issues, you should switch your bulb off to avoid it to get permanently damaged. This is like the first aid to ensuring you do not spend so much in repair and re-installation costs.

How to Fix It?

Depending on the type of LED light you have invested in, fixing your light when it starts to fluctuate isn't such a big deal. Firstly, you want to check that your light is well plugged in when you notice that it is flickering. Sometimes, the flickering might be as a result of your light not being in total contact with the power outlet. If this is the case, then it is not a big deal. Just secure it well to ensure it is tightened appropriately.

Sometimes, the bulb might be well secured, but still, you are not certain of where the flickering is coming from. This is the point where you consider your control panel or electrical panel for any loose wiring. However, you need to be sure you are comfortable with dealing with loose wires. If not, then you might have to consider using a professional.

A loose wire, as we have mentioned earlier may result in flickering. If you are apple to identify the loose wire, which is quite easy after unscrewing the panel, just tuck them in and ensure the flickering has stopped. If this isn't also the case, then the fault might just be with the LED light itself.

A fault LED light may be a result of a blown fuse, blown, or swollen capacitor. Depending on how much you have invested in your light set, then you may either change the blown fuse or capacitor or consider changing the bulb entirely. Sadly, in most cases, it is often ideal to change the LED light after discovering a swollen or blown capacitor and fuse. This is because you will rarely get a bet that is almost a genuine as the one that got damaged.

Having a flickering LED light could be annoying. It is not only annoying, but it may also pose some avoidable health hazards. That is why it is very essential to watch out for your flickering faults in your light set.

As discussed earlier, you could either trace the fault that may not be with the LED light itself or change the light if the fault resides in the LED set. Whichever the case, the steps in fixing the situation isn't complicated at all.

Welcome to Green Wind Solar, where you can find credible information on solar and wind-powered products.

GreenWindSolar.com is a participant in the Amazon Services LLC Associates Program, an affiliate advertising program designed to provide a means for website owners to earn advertising fees by advertising and linking to Amazon.com, Amazon.co.uk, Amazon.ca, Endless.com, Smallparts.com, Myhabit.com, and any other website that may be affiliated with Amazon Service LLC Associates Program. We do not specifically market to children under 13. As an Amazon Associate, we earn from qualifying purchases.